Get your haunt on at Chicago Horror Theatre Festival 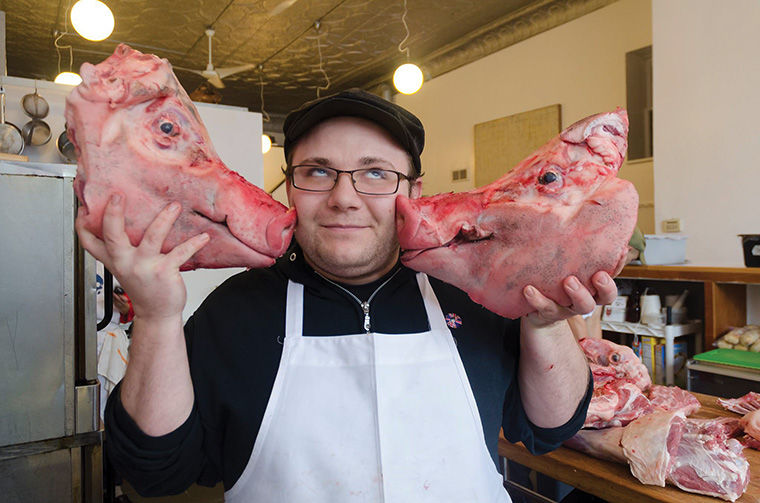 “Meaty Bits of Jimmy Shay” is Jimmy Shay’s one-man comedy show in which he plays a butcher.

Theater and horror lovers alike can get their fix at the two-weekend Chicago Horror Theatre Festival on Oct. 29.

The event, to be held at Stage 773, 1225 W. Belmont Ave., among other Chicago locations, includes an array of horror-themed programming from a wide variety of genres, including burlesque, musical theatre, monster stories and sketch comedy.

The festival is produced by Marc Lewallen and Brad Younts, horror lovers and experienced theatre junkies who co-wrote “Musical of the Living Dead,” a genre-bending musical comedy about zombies that has run every year around Halloween since 2010 at Stage 773 and recently surpassed 100 shows.

Younts said he and Lewallen wanted to use the success of “Musical of the Living Dead” as a springboard to create this celebration of horror theatre.

“As we were approaching the end of our five-year stint with the musical, we started talking about putting the festival together,” Younts said.

The fest is a natural next step following the success of “Musical of the Living Dead,” according to Lewallen.

“We decided it was a good time to focus our creative energy on not only [making] new shows for ourselves, but [also] giving more of a voice and platform to the horror theater scene in Chicago as well,” Lewallen said. “We felt really lucky that we were so successful with ‘Musical of the Living Dead,’ and we wanted to use our brand to expose other people’s talent to Chicago.”

The festival’s uniqueness lies in the variety of types of programs it includes, Lewallen added. Shows range from “Centralia: A Bloody Rock Musical,” a bloody rock musical, to an all-male burlesque show to “Horror Movies Retold… with Alcohol,” a show in which drunk storytellers and actors tell and reenact versions of their favorite horror movies.

“‘Musical Horror Story’ is very dark and creepy,” Younts said. “‘The Haunted Life’ is about paranormal investigators who are also a boy band, and it’s really silly and funny. I think that speaks to the [idea that the] umbrella of Halloween and horror can run everything from incredibly creepy and scary to fun and pure comedy.”

He added that there is a lack of Halloween–related programming, which is unfortunate as the holiday is synonymous with fun and excitement.

There is also an entire day devoted to children’s programming on Nov. 1. Jill Olson, owner and director of Storytown, an improv troupe for children in Chicago, had a hand in bringing two children’s shows to the festival.

“I know everyone at Stage 773 from Sketch Fest, and they said, ‘Hey, we’re doing this other festival and are looking for kids’ programming,’” Olson said.

Through connections at Funny Bones Improv, an organization that brings improv to children in hospitals, Olson heard about a musical in one act entitled “Which Way is Witch?”—a children’s musical about a young witch who tries to ruin Halloween.

Storytown is also bringing a Halloween––themed improv show to the festival.

“When I was talking with Marc [Lewallen] about programming, I told him Storytown could also do a Halloween show because they do an improvised musical.”

With the addition for a younger crowd, the schedule embodies what Younts said is the mission of the festival—to show how diverse horror genre can be.

“We feel there is something for everyone,” Younts said. “Halloween is such a fun and exciting holiday, and there just isn’t a lot about it. There are a thousand Christmas-themed things around December, but there is rarely something that is totally dedicated to Halloween entertainment.”