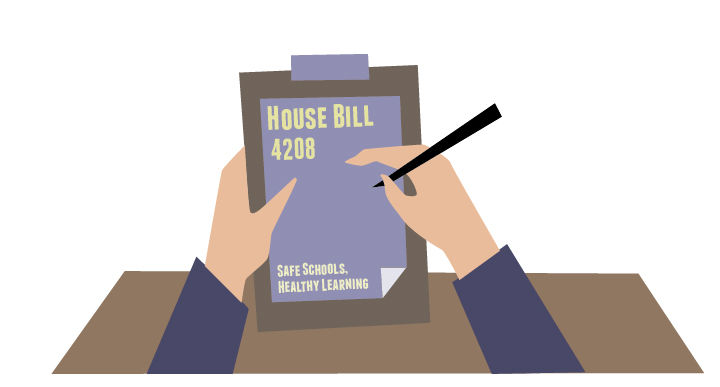 During her senior year of high school, Amina Henderson-Redwan  was leading a peace circle at Gage Park High School on Chicago’s Southwest Side when she felt an anxiety attack coming on.

As she tried to walk away, she said she got into a conflict with a school security guard and was arrested and detained for about five hours before being taken to a juvenile detention center.

Three years later, Henderson-Redawn is lobbying with the Voice of Youth in Chicago Education for legislation that will provide grants to fund mental health professionals in Illinois public schools. House Bill 4208 by state Rep. Emanuel “Chris” Welch, D-Westchester, in December 2017, aims to do that.

“This bill is important because what I needed at that moment in time was a counselor. Someone who I could actually talk to, not be put in handcuffs while having an anxiety attack and feeling as though I couldn’t breathe,” Henderson-Redawn said. “I’m passionate about this bill because too many youth  feel like their mental health is being ignored.”

Welch, a proponent of mental health services in schools, said the bill will create the Safe Schools Healthy Learning Environment grant for statewide schools to apply for and allocate funding where needed, whether it is school psychologists, social workers or after-school activities.

The bill passed the Illinois House, 64–25, April 27, and will now head to the Senate, according to state legislature records.

Katherine Cowan, director of communication for the National Association of School Psychologists, said mental health professionals in schools play a critical role in children’s well-being. Too often, students with trauma are mistakenly assumed to need special education rather than mental health services. Licensed psychologists in schools can help identify these cases, Cowan added.

“Students, especially black and brown students, walk around with PTSD like it’s a backpack every day, and it goes unnoticed,” Henderson-Redawn said. “Passing this bill could change so much with the school system in every district because students need their voices heard and need to be treated correctly for their mental and behavioral health.”

Henderson-Redawn also said school resource officers are often great for school districts, but officers are not trained on preventative measures or how to handle mental health crises. This could cause unnecessary arrests when school administration relies too heavily on officers rather than taking their own actions.

Voices of Youth in Chicago Education is drafting legislation that would train officers on mental health-related issues, she added.

None of the legislators in the committee who voted against the bill responded to requests for comment as of press time.

“States have sovereign rights and the current administration in Washington—from a political and philosophical [stance]—differs from a lot of what we believe in Illinois,” Welch said. “We are a blue state. We believe in supporting our most vulnerable population; the poor and middle class should take priority over millionaires and billionaires.”