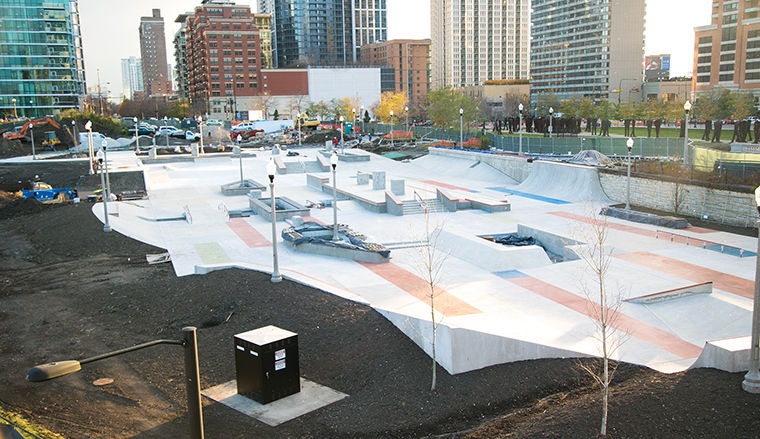 The $2.7 million skate park that extends in Grant Park from the 11th Street pedestrian bridge to Roosevelt Road will be completed in November and will open in December.

Skateboarders will have the luxury of flying high on their boards at Chicago’s newest skate park soon to open in Grant Park.

Some skaters are happy about the new park but think the Grant Park Conservancy is taking too long to lay the concrete and are afraid the cold weather will prevent them from skating.

Wicker Park resident Big Red Amadeus said he is happy that a skate park will open in the South Loop, but he said he is not pleased that the process is taking so long. He said there is a greater chance the concrete will crack because of the rapid change in the weather–causing delays.

“I think there’s still going to be water in [the concrete],” Amadeus said. “It’s not going to work out [and it is not] going to fit probably. It’s a good idea, but they left us all summer with nothing. Now it’s winter time.”

Anthony Davis, a 22-year-old Bensenville resident who works in Chicago and has been skating for 16 years, said he visits the Logan Square skate park often and that skating is his passion. Davis said he is equally excited about the skate park that will open in Grant Park.

“I’m pretty stoked on it,” Davis said. “It’s in a really cool area, it’s easy to get to [and] it’s lit up all the time,” Davis said. “I think it’ll definitely be a bigger attraction than all of the other parks.”

However, Davis said he agrees that the frigid weather will probably cause delays in construction, therefore causing frustration for skaters, but he also said his fellow skaters and some of his friends who have broken into the park might have caused some damage as well.

“I’m pretty sure the concrete is going to crack up pretty quick because of the weather,” Davis said. “They’re not letting it cure properly. People breaking in and skating on it before it’s cured [will] probably mess with it too.”

O’Neill said the anticipation for the parks opening is overwhelming. O’Neill said skaters should not worry about the concrete cracking because it is already set, and the only thing that needs to be completed is the landscape.

“They want to use it so badly they break into it, which is not a great thing,” O’Neill said. “They can destroy things that are not done yet. It’s a great testament to how much they really want to use it.”

O’Neill said some residents in the South Loop have complained, but he said he has spoken to the neighborhoods residents and educated them about the park. He said he does not think there will be any issues.

“Grant Park is Chicago’s front yard, so no one community has any more stake in it than anyone else,” O’Neill said. “It’s not a community park. It’s a regional park. It’s for everybody. Everyone needs to respect the fact that it’s a park for all of the city.”

David Washington, a 56-year-old Portage Park resident, said he tries to take his 7-year-old son skating once a month. Washington said although skate parks have the potential to cause unnecessary noise to residents, he thinks the parks are beneficial to kids like his son.

“I think there should be more [skate parks] scattered about in the city and maybe more so an indoor one,” Washington said. “That would really help in the winter.”

O’Neill said the park is important not only for nearby residents, but for Columbia students as well. He said the park may help the college with recruiting because there are lot of skateboarders.

“It’s going to be a real asset to Columbia, and the more we improve Grant Park and encourage student to use the park, it really helps Columbia, not only with recruiting students but just the quality of life.”