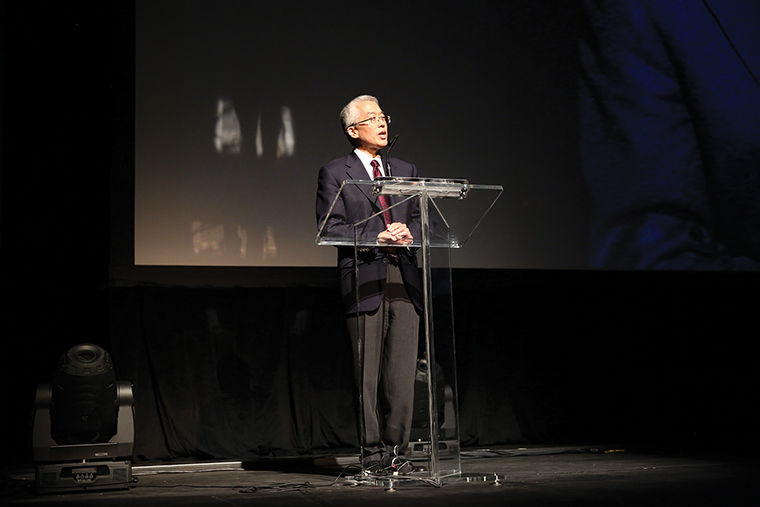 President Kwang-Wu Kim spoke about the college’s long-standing partnership with the Chicago International Film Festival during the opening ceremony on Oct. 9.

The screening of director Liv Ullmann’s film “Miss Julie” was the focal point of the event, but the festivities surrounding it started at about 5 p.m. on Oct. 9. The film starred actor Colin Farrell, who also attended and spoke at the screening.

Columbia was recognized as the lead partner at the event by Michael Kutza, vice president of the Chicago International Film Festival, who later said during an address to the crowd that the partnership formed with the college’s Cinema Arts + Science Department has been beneficial to both institutions.

The Chicago International Film Festival hosted a VIP lounge where Columbia affiliates and administration members convened and discussed artwork featured in this year’s festival before entering the theater to screen the evening’s feature film.

Columbia’s President and CEO Kwang-Wu Kim was present to speak on the college’s behalf about the partnership and support for the festival. Kim said he was excited that the college is able to help sustain the longest-running international film festival in the country.

“This year, we have work by faculty, alums and current students featured in the festival, so of course that makes me proud as the president of Columbia to be able to see our own have an opportunity like this,” Kim said.

During his address to the crowd, Kim said Columbia’s fundamental purpose and mission is to educate young people to become the authors of the culture of their time.

Mark Kelly, vice president of Student Success, said during an interview that the bond formed between the college and the festival throughout the years is a testament to the focus on encouraging students to cultivate great works of art and enter their respective industry prepared.

“The heart of the partnership is our students, who then become alumni who are filmmakers creating work that is esteemed and recognized by the Chicago International Film Festival,” Kelly said.

Kelly cited the Cinema Art + Science Department as one of the most lauded film programs in the country and said the college supports the festival because the talent of its faculty and students are showcased there.

“It has nothing to do with Columbia being a sponsor,” Kelly said. “It’s the power of the student and faculty work that is being selected and represented in the festival.”

Kelly said the partnership between Columbia and the film festival serves students best through the number of alumni who are involved in the festival and have the opportunity to have their work compete with professional filmmakers in such a prestigious event year after year.

Anne-Marie St. Germaine, interim vice president of Communications & Marketing, said the opportunity for the college to have representation at the event was pivotal, not only for the Cinema Art + Science Department but for Columbia as a whole.

“The idea of this partnership and collaboration is that it becomes an avenue for graduates of our program into the industry,” St. Germaine said.

While Columbia’s administration endorsed the partnership proudly at the event, St. Germaine said that the college’s main focus was to continue fostering an unwavering level of communication between students within the Cinema Art + Science Department and the film festival for years to come.

Additionally, St. Germaine said exposing Columbia students to preeminent programs like the film festival can heighten the levels of creativity within their own art as well as ensure the mutual success of both institutions..

“We are always interested in creative approaches that are in the best interest of our students because our students come first and foremost,” St. Germaine said.