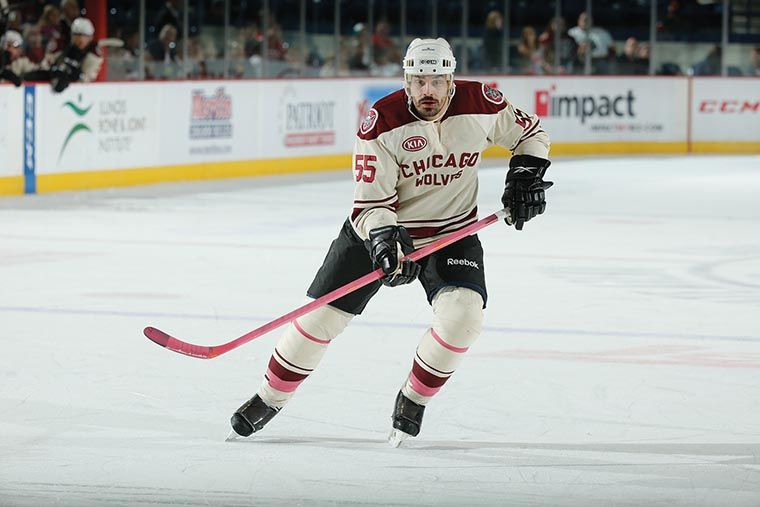 The Chicago Wolves are teaming up with A Silver Lining Foundation for the fifth year in a row to promote breast cancer awareness.

The Wolves hosted a breast cancer awareness night Oct. 18, presented by Northwest Community Healthcare. Every Wolves player used specially-made pink sticks during warm ups, and some players even used them throughout the game.

Several of the Wolves’ notable players autographed the pink sticks, with each one being sold for $175—the price of a mammogram—to fans. Supporters also received a photo with the player whose stick they purchased. Courtney Mahoney, senior vice president of operations for the Wolves, said the pink sticks are one of the better parts of the initiative because the organization knew it helped give a mammogram to someone who could not afford one.

She said it is a privilege to help raise awareness for breast cancer and other health issues.

Heidenhain, a Schaumburg manufacturing company that sponsors the Wolves, matched each $175 donation. Throughout October, fans purchased “Stick It to Breast Cancer” gear, including apparel and autographed pucks.

All proceeds benefit ASLF’s “Buy a Mom a Mammogram” program as well as other Wolves charities.

She said the evening’s events were unforgettable.

“It was a lot of fun,” Amicangelo said. “I got to meet the captains from both teams [and] they made me an official Wolves [jersey] that the hockey players wear with my name across the back. They even spelled it right.”

About 40,000 women in the U.S. are expected to die in 2014 from breast cancer, though death rates have been decreasing since 1989,—with larger decreases in women younger than 50.

These decreases are thought to be the result of treatment advances, earlier detection through screening and increased awareness, according to NCH.

The treatment provider has partnered with the Wolves to continue raising money and awareness for breast cancer charities in Illinois.

Patrick Reilly, corporate communications specialist for NCH, said the partnership with the Wolves allows NCH to reach out and educate a whole new group of people— hockey fans.

“NCH’s breast cancer awareness campaign, ‘Get Checked,’ in partnership with the Chicago Wolves, is focused on the importance of annual mammogram screenings, especially for women who are 40 and older,” Reilly said in an emailed statement. “Throughout the hockey season, the games will feature players using pink sticks and pink pucks to help draw awareness to this important campaign. By working with the Wolves, NCH can tap into people’s passion for sports to help raise awareness about early detection and share our knowledge about cancer with hockey fans.”

Mahoney said the Wolves hope to continue these charity events for years to come.

“The goal is always to continue what we’re doing,” Mahoney said. “But how do we make it better? How do we raise more awareness each year? I would love for Reebok to come create a perfect pink stick that they would donate for the teams to use—we’re going to keep pushing them on that. Anything we can do [to help these charities], we will certainly continue to do so.”