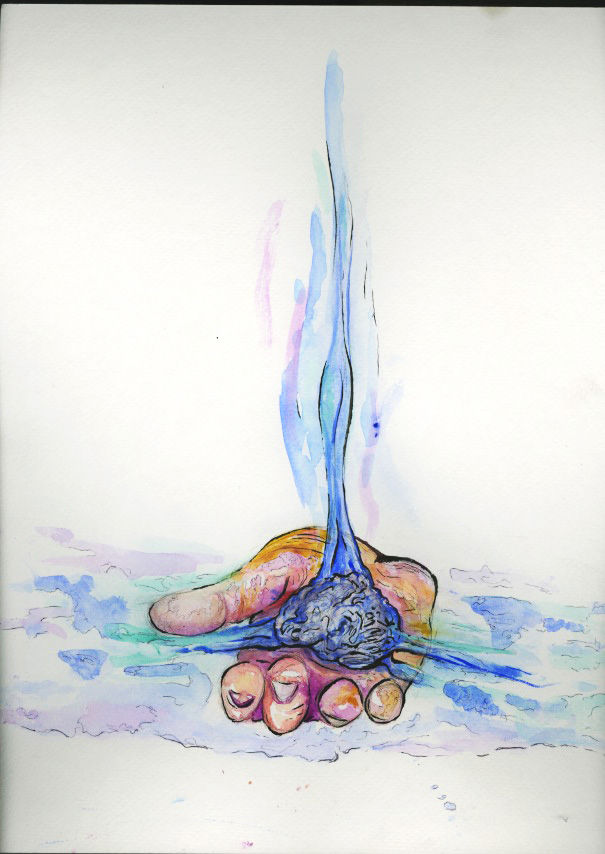 A diver stands poised at the edge of a dock. With one smooth motion, he leaps outward and parts the surface of the water with his hands. Immediately, his skin prickles at the ocean’s coolness. The palms of his hands feel water ripple; the hair on his arms stands on end, and he begins to shiver—all of these senses work in concert to tell him he’s wet.

Though they have sensors for pain and heat, humans never evolved a receptor to detect wetness.

New research suggests multiple senses may work together to sense moisture on the skin. In a study published in June, researchers from the Environmental Ergonomics Research Centre at Loughborough University in the U.K. found that humans may use temperature and texture to determine when a surface is wet.

The researchers recruited 13 college-age men and exposed different areas of their skin to warm, neutral and cool liquids. The hairy skin, which covers the majority of the human body, was more sensitive to moisture, while hairless skin—the palms and the soles of the feet—was less sensitive.

This could be because the palms of the hands have more of the mechanosensory receptors, Filingeri said. Evolutionarily, humans use their hands to explore, and having more tactile receptors in the palms and the fingertips allows them to better evaluate their surroundings.

However, because they do not have a particular sensor dedicated to liquids, humans are born without the ability to detect wetness.

“Very simply, there is evidence in the literature that suggests that, as with any process in our lives, we learn by experience,” Filingeri said. “The first time we come in contact with something that is wet, we experience a particular sensation—coldness, stickiness. What it suggests is that the brain connects these sensations to the actual perception of wetness.”

The two components seem to be codependent, Filingeri said. Without the tactile stimulus, the only thing humans sense is temperature, which is not enough to induce the sensation of wetness. Simultaneously, if the water perfectly matches body temperature and one’s vision is impaired, it is hard to sense.

Sliman Bensmaia, an assistant professor in the department of Organismal Biology and Anatomy at the University of Chicago and principal investigator at the university’s Bensmaia Lab, said the result is not surprising to him. Bensmaia said the sense of touch is a window into how the nervous system presents information.

“You’re seeing two different ways to represent information in three different types of receptors, and somehow all these disparate signals have to be integrated to form a coherent whole in this sort of holistic perceptive texture, which is what we experience,” Bensmaia said.

However, humans are not the only organism to synthesize senses to gauge their environment. Insects perform a similar process with their vision, according to Gary D. Bernard, an affiliate professor of electrical engineering at the University of Washington.

“[Insects’] sensory suite that they use to perceive things is broader than ours,” Bernard said. “The light that’s reflected from the water is a partially polarized parallel to the surface. It’s in the ultraviolet, but it’s also polarized ultraviolet that they’re looking for.”

Insects use a variety of senses to evaluate their environments, and structural differences in their  eyes allow them to see spectra of light humans cannot. Their eyes have receptors with structures that allow them to see different types of light.

Additionally, the visual pigment cycle that humans experience after looking into a bright light is a parallel to the way insect vision functions, Bernard said. When a light flashes and there are spots in the blur, that is the eye readjusting after being damaged. The cycle depends on the Vitamin A molecule to restore itself, which is identical to the way many other organisms see.

“It’s wrong to think of us as biologically alone,” Bernard said. “There are principles all across the tree of life that are pretty conservative and pretty widespread.”