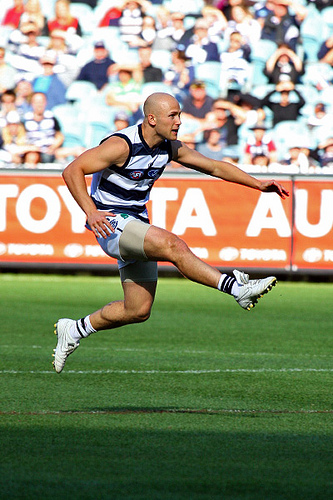 Gary Ablett kicks the football during a game in 2009

Geelong defeated St. Kilda by 12 points in the 2009 Australian Football League (AFL) Grand Final played at the Melbourne Cricket Ground. Both sides advanced after winning their Qualifying and Preliminary Finals.

The AFL finals series groups the best eight teams into two groups – the first through fourth and fifth through eighth. The winners of the Qualifying Finals (first v fourth, second v third) get a week off, the losers play the winners of the Elimination Finals (Fifth v eighth, sixth v seventh).

Australian rules football is played on a field 170-200 metres long by 140-170 metres wide. The two teams consist of 18 players a side. Scores are quoted as goals-behinds (total).

St Kilda finished top of the ladder after the 22 Home and away season with only two loses in rounds 20 and 21. They defeated Collingwood by 28 points in the Qualifying Final then the Western Bulldogs by seven points in the Preliminary Final.

Geelong finished second with four losses, all in the latter half of the season. They defeated the Western Bulldogs by 14 points in Qualifying Final then Collingwood by 73 points in the Preliminary Final.

Geelong player Gary Ablett Jr. won the Brownlow Medal earlier in the week but quickly “forgot” about it to focus on the Grand Final. “We’ve prepared well, we’ve prepared as good as we can and we have some important players back at the right time, it’s fantastic,” he said. “We’ll be going into the game with no excuses.”

Bureau of Meteorology senior forecaster James Taylor predicted that storms may pass over the MCG during the second, third or last quarters. “That’s when we expect most likely we’ll see shower activity spreading across Melbourne,” Mr Taylor told AAP. “Hopefully, the opening ceremony will escape the weather. Thunderstorms are certainly possible.” The police are also out in force, and will check all drivers leaving the ground are not drunk.

Geelong won the toss and kicked towards the City end. The predicted weather did not materialise in the first quarter Within the first eight seconds, the both teams had held up the ball causing another ruck contest.

St Kilda kicked their first goal through Brendan Goddard on eight and a half minutes. They continued to pressure Geelong resulting in another goal to Lenny Hayes.

The quarter ended in a back and forth tussle. Adam Schneider finished the quarter with a goal.

The predicted rain started during quarter time and continued through most of the second quarter but eased off towards the end.

St Kilda opened the quarter scoring a goal through Sean Dempster within the first three and a half minutes to push there lead to nine points. Geelong maintained forward pressure for the next two minutes before St Kilda countered to no result. Geelong responded to the counter with there own but did not score.

It took another ten nine minutes before either team scored a goal. Geelong scored that goal through Shannon Byrnes. they scored the next three goals through Gary Ablett, Tom Hawkins and Paul Chapman.

St Kilda rounded out the quarter with goals to Clinton Jones, Justin Koshitzke and Schneider.

The third quarter started with Geelong kicking a behind. Soon after, A St. Kilda player was sent off under the blood rule to receive medical attention, before Geelong kicked another behind. Cameron Mooney then kicked the first goal of the third quarter, putting Geelong back in front by one point. Nick Riewoldt then kicked a goal to put St. Kilda back in front, followed by another behind. Riewoldt then attempted to kick another goal, but was smothered on the goal line, scoring a behind. Another behind was scored by St. Kilda soon after.

Paul Chapman then kicked his second goal to reduce the margin to one point, with 8:53 remaining in the quarter. Gary Ablett then kicked a behind to three quarter time.

Max Rooke kicked a goal on the final siren to get Geelong to a two goal win.

Paul Chapman won the Norm Smith Medal for being the best player on the ground in the Grand Final.

The game was broadcast live on Channel 10 and One HD in Australia; ESPN in the USA, United Kingdom and Ireland; TSN in Canada; and Australia Network in the Asia Pacific region. Some Peer to Peer websites streamed the game live.