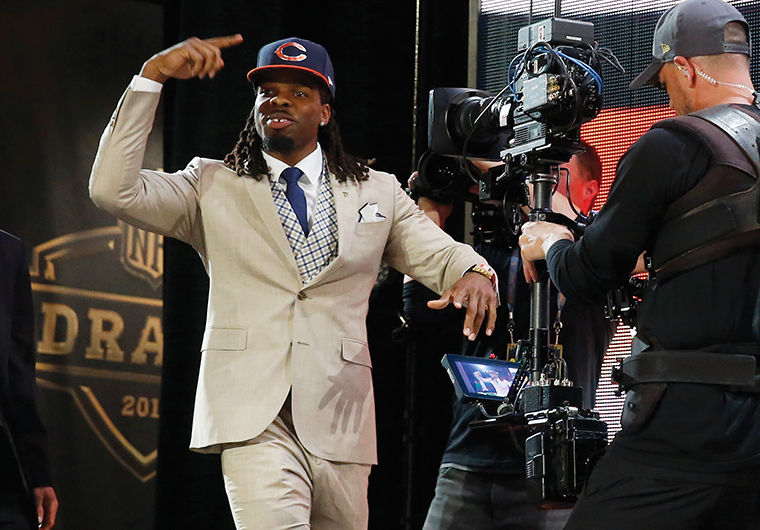 West Virginia wide receiver Kevin White celebrates after being selected by the Chicago Bears as the seventh pick in the first round of the 2015 NFL Draft, Thursday, April 30, 2015, in Chicago. (AP Photo/Charles Rex Arbogast)

The excitement builds, the pick is in. Commissioner Roger Goodell walks to the podium as fans cheer—finally, the 2015 NFL Draft has begun.

For the first time since 1964, the draft returned to the Windy City, creating the most interactive draft in NFL history. This year, the event left its usual home of New York City’s Radio City Music Hall, replacing it with the Roosevelt University Auditorium, 430 S. Michigan Ave. Grant Park was turned into Draft Town, an activity-filled outdoor area where fans could watch the process live.

Rounds 1-3 were hosted at the auditorium, and rounds 4-7 were held outdoors at a Selection Square, which served as draft headquarters where news of selected picks was delivered to fans in real time.

The draft went exactly as expected, with Heisman trophy winners Jameis Winston and Marcus Mariota going number one and number two picks overall. Winston, quarterback from Florida State, was the first pick from the Tampa Bay Buccaneers and Mariota, quarterback from Oregon, went to the Tennessee Titans.

The two first projected picks were not in attendance at the draft. Winston said he wanted to celebrate in his Alabama hometown whereas Mariota, a Hawaiian native, spent his time on the islands celebrating with locals, neighbors and family.

While most Titans fans are ecstatic over the drafting of a Heisman trophy winner in Mariota at No. 2, Joe Rowan, a lifelong Titans fans who traveled from Fort Wayne, Indiana, to watch his favorite team pick, was not thrilled with the pick.

Before the draft, Rowan said he did not see any scenario where the Titans would keep Mariota, even if they drafted him with their No. 2 pick.

“I would rather have [the Titans] take the most talented guy there [than Mariota],” Rowan said. “I still have a feeling if they take Mariota and they can’t get a trade, that they will wait till the draft is over and then do a trade.”

One of the teams on the shortlist to make the trade was the hometown Chicago Bears. Despite Cutler’s recent struggles, many Bears fans were not open to the idea of trading for Mariota.

The Bears stuck out their number seven pick and selected Kevin White, a wide receiver from West Virgina. Fans went wild for the man who broke records running a 4.53-second 40-yard dash in the NFL scouting combine.

Louis Tate and Bryan Washington, best friends, Chicago natives and Bears super fans, were members of that group, saying Mariota was not a good fit for the Bears for various reasons. Tate said the city of Chicago would not welcome the rookie QB with open arms.

“A rookie can’t come here and play, I’m sorry,” Tate said. “The people won’t allow it. They would [freak] out. Mariota [is] from a different league. He’s coming from Oregon and they don’t really have any competition. Where the Bears play you have Detroit, Minnesota … that’s week-in and week-out competition.”

Washington was not as strongly opposed to the trade as his friend—to him it was all about the price tag involved.

“With [the Bears] having John Fox and him being a run-heavy coach, I think it wouldn’t be too bad because they are taking the ball out of [Mariota’s] hands,” Washington said. “Mariota is a game manager, which is something the Bears need. I just wouldn’t agree with giving up what we would have to give up to have him.”

The prospects got the chance to walk the Gold Carpet on Michigan Avenue on April 30, where fans could watch and cheer on their favorite players.

Fans were especially interested in seeing Shane Ray, from Missouri, after his marijuana bust on April 27. There was talk that Ray would not attend, but the defensive end pushed through the adversity.

“This moment is everything, I have realized the mistake that I have made, I’ve come here and I’ve owned it and I’ve learned from it,” Ray said. “More importantly, I have worked my whole life to be here, and I feel like I deserve this opportunity. Everybody has a bump in the road. It just so happens mine was earlier in the week. I am just ready to go show whoever decides to take a chance on me. Give me the opportunity and I will be dedicate myself to the team.”

The Denver Broncos took a chance on Ray, drafting him at the number 23 slot.

Other players showed their gratitude regarding their journey to the draft as well. Andrus Peat, offensive tackle from Stanford, said Chicago has been really nice and he has embraced the overall experience.

“This is a once-in-a-lifetime experience,” Peat said. “My biggest motivator has been being a role model for my younger siblings and making my family proud. The draft experience is something I am going to remember for the rest of my life.”

Peat went in the first round at the 13th pick to the New Orleans Saints.

Laken Tomlinson, Chicago native from Lane Technical Prep High School, said he was happy to represent his school and was feeling overwhelmed from his journey. He went to the Detroit Lions as the 23rd pick in the first round.

“I moved here [from Jamaica] to the United States in 2003 and [I’m] reminded how far I’ve come,” Tomlinson said. “Everything I’ve done re-opened my eyes to see what my life used to be like.”

There were some prospects that were jokesters on the carpet, such as Trae Waynes, who was the  No. 11 pick to the Minnesota Vikings. Waynes said his family has kept him grounded and humble, but he seemed to still have time to joke around.

“‘Pirates of the Caribbean’ is my favorite movie,” Waynes said.  “My quote of choice, I would have to say is ‘Why is the rum gone?’ But I have met a lot of friends throughout this process, and we all stay in touch. The NFL is a big fraternity. My family, they have always been my No. 1 supporters and [have] kept me humble and grounded.”

Among the many festivities the draft brought to Chicago, Draft Town was perhaps the biggest. Draft Town offered a variety of fun activities such as food, free player autographs, photo ops, interactive games and several areas where the draft could be viewed.

Bears guard Kyle Long attended Draft Town and did a live interview in front of a large crowd of Bears faithfuls. He fielded questions from fans, signed autographs and took selfies.

Long told fans he did not care if the Bears went offense or defense in the first round because he had a specific criteria on the kinds of players he wanted the Bears to draft.

“All I want is a [really good] football player,” Long said. “One that can come to Chicago and take pride in what means to wear that ‘C’ on his helmet and get after it every Sunday.”

Long also attempted to put any talk about the Bears not being competitive this season to rest after the team finished out their rough season with a 5-11 record.

“People use the term rebuilding and reloading, but not in our building we don’t,” Long said. “We’re getting ready and we’re going to go punch somebody in the mouth. We don’t care who it is, we don’t care who we line up against, we’re ready to roll.”

When Long mentioned the name of oft-maligned Bears quarterback Jay Cutler, the crowd of Bears faithfuls let out a swarm of boos. When asked about the backlash Cutler is facing from fans, Long defended his quarterback.

“There’s not a lot of backlash in our locker room,” Long said. “We know who our quarterback is. We know who we support. Jay is a good friend of mine and a good football player and he is somebody we are going to rely on to win games this year.”