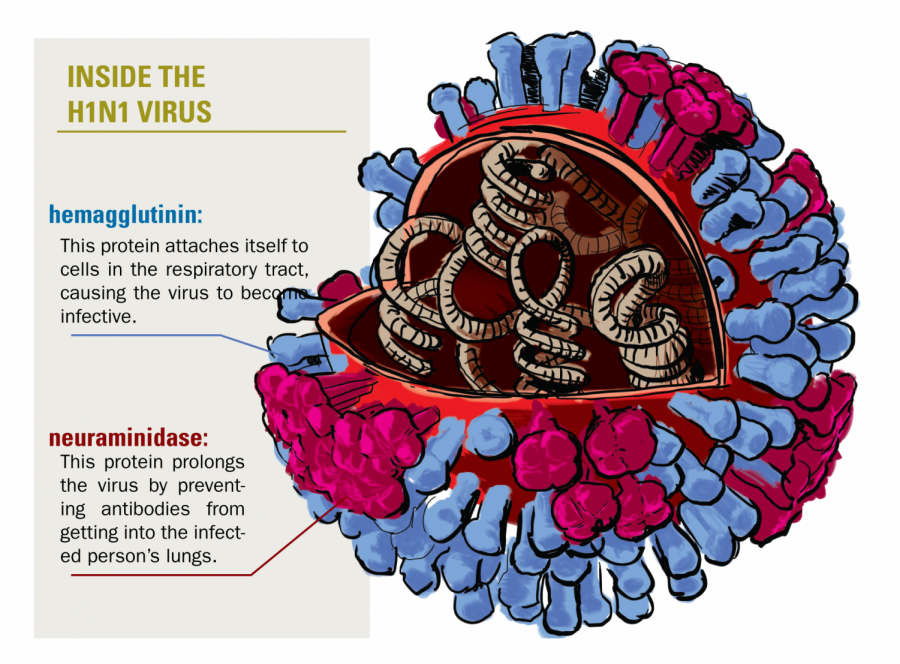 The 2009 H1N1 virus, commonly known as swine flu, continues to spread among young adults across the United States as flu season hits its peak

Young adults are at higher risk of being hospitalized by the flu this year than during the last flu season.

The elevated risk stems from the re-emergence of the H1N1 virus, which caused the 2009 “swine flu” pandemic, according to Darlene M. Foote, public affairs specialist for the Centers for Disease Control and Prevention. The virus hit older children and young adults the hardest when it first emerged, a trend that is continuing this season, according to Foote.

People ages 18–49 account for 61 percent of the total influenza hospitalizations so far, according to the CDC.

The majority of flu viruses in Chicago are linked to the H1N1 strain, making residents more susceptible, according to the Chicago Department of Public Health’s influenza surveillance systems.

The Illinois Department of Public Health reported that 36 patients in intensive care during the week of Jan. 17 tested positive for H1N1. Only 13 ICU hospitalizations were reported during the same period last year.

“The good news though is that the flu vaccine that we’re offering this year includes the H1N1 strain which will add protection from contracting the H1N1,” said Brian Richardson, CDPH director of public affairs.

The reason for the increased spread of the H1N1 virus is unknown, and medical professionals are unsure why this strain puts young adults at higher risk, according to the CDC.

“It varies from season to season, the flu strains that hit hard,” Richardson said.

The virus may be spreading quickly among college students because they often ignore symptoms, said Dr. Edwin B. Miller, an internal medicine specialist.

“Everyone is going to class normally but not feeling quite right,” Miller said. “If they are coming down with the flu and they have it full-blown, that’s when it’s the most communicable.”

Medical professionals are encouraging young people to get flu vaccinations to combat the spread of the H1N1 virus. Young adults with conditions such as asthma, diabetes, heart disease, pregnancy and morbid obesity have a higher risk of falling victim to the flu, according to the CDC. Columbia’s Health Center offers vaccinations to student for a fee.

Vaccinations are also available through local drugstores and city clinics, which are both listed at ChicagoFluShot.org. Nevertheless, Alan Giles, a freshman theater major at Columbia, had some difficulty when he attempted to get vaccinated at his local CVS.

“I just walked to the back of the pharmacy and I asked if I could get one,” Giles said. “The woman said they had experienced some water damage because there was a leak that had gotten over their supplies. But she then recommended two different [CVS pharmacies] on State Street that I could go to.”

Alternatives to getting vaccinated include eating well, exercising regularly and habitual hand washing, according to Richardson. Miller suggests taking the prescription drug Tamiflu and 2,000 milligrams of vitamin C daily.

“The best thing to do is to stay out of contact with people,” Miller said. “If you happen to feel like you’re coming down with something, don’t go out that day because then you will be contagious and give it to everybody.”