Someone you should know: Lara Marie Schoenhals 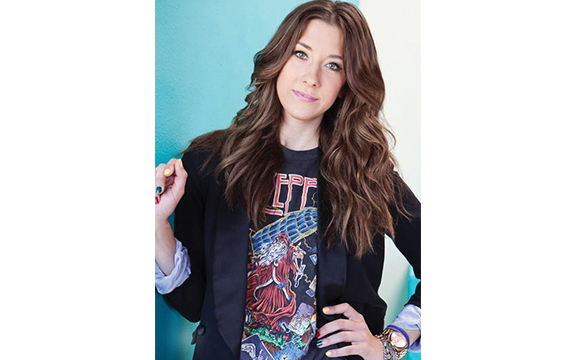 Lara Marie Schoenhals, a 2008 film & video alumna, never thought she would graduate and go onto become a New York Times best-selling author. But one night in 2010 spurred a series of events that would lead her to do just that.

Schoenhals’ good friend Tanner Cohen came up with the hashtag #whitegirlproblems one night while the two were out for drinks. Schoenhals, along with Cohen and his brother, David Oliver Cohen, embraced the Twitter hashtag in 2010 as a joke.

Four years later, the trio has more than 800,000 Twitter followers and a book based on the popular phrase. More than 600,000 people bought, “White Girl Problems,” a faux memoir of fictional Babe Walker, a wealthy girl living in Los Angeles whose “problems” landed her in retail rehab after spending $246,893.50 one afternoon at the luxury department store Barneys.

“We are really creative people and have our hands in creative businesses and wanted to be in entertainment,” Schoenhals said. “It’s taken a bit of a roundabout path, but it’s been really fun.”

The success of “White Girl Problems” and Walker’s character led Schoenhals to write the book’s sequel, “Psychos,” which will be available in stores on Amazon.com on April 29.

The Chronicle sat down with Schoenhals to discuss her time at Columbia, rise to fame and future plans for “White Girl Problems.”

THE CHRONICLE: How did you come up with “White Girl Problems?”

LARA MARIE SCHOENHALS: I wrote “White Girl Problems” with two other guys and they are both brothers. Tanner used to live in Los Angeles and I met him when I was working on a film during a summer off of school and we became close friends. When I moved to L.A., we stayed in touch and he and I were out drinking one night and he had written #whitegirlproblems on his personal Twitter account. It just struck me as the three words that summed up my entire existence. As we got drunker and drunker, we kept coming up with more “white girl problems,” and by the end of the night we were like, let’s start a Twitter account. We never intended for anything beyond our friends laughing at it to happen, and then suddenly it became this whole thing.

LMS: The Twitter just started off as general white girl problems, or more along the lines of rich girl problems. Then after we started it, Tanner told his brother David Oliver about it and we all three started writing the tweets…. Then after about six or seven months, we realized that the tweets that were getting the most response were the ones that came from the voice of a post-college 20-something-year-old girl. We decided to create this fictional character named Babe Walker and she was going to be the voice behind “White Girl Problems”….We originally conceived her because we were going to write a television pilot about her life and that’s why we made up the character Babe, to flesh out what the pilot could be and what her world is.

CC: What is your response when people say “White Girl Problems” is offensive?

LMS: Honestly, we do it all as satire. We are making fun of the type of girl that functions in that way, so it’s all supposed to be satire and isn’t supposed to be taken seriously. I think the beauty of the character is that no one knows whether it is real or not. It can be really provocative, but once you get down to the bottom of it, it’s all satire.

CC: Have you ever concealed your identity as the author of “White Girl Problems” or are you open about it?

LMS: We have done some interviews where it’s the three of us, but mostly we don’t try to put it out into the world and pull the veil back behind Babe. We do a lot of written interviews as Babe and we kind of try to keep it a little secret, but we don’t go out of our way to make sure nobody knows…. There’s also a bit of mystery online because we never put a face to Babe.

LMS: Yeah, I think she definitely is. We have pulled from our own life experiences to write the book and then we make up a lot of stuff for her to do. We pull from relationships we had as friends or boyfriends, but her life is 100 percent fictional. It’s good that there’s three of us because then we can bring a lot of life experiences to the table and we have a lot of friends that have Babe-ish qualities too, so it makes it more fun to write. As we create more of her world and the deeper we go into sequels, the more we can just come up with Babe-specific things because she is such a specific character to us. That makes it fun because it feels as if she exists and we know her and we know what kind of decisions she would make in her life and things she would do.

CC: Did you ever plan on moving to L.A. after college?

LMS: I knew I was going to either move to New York or Los Angeles after school and the weather kind of decided that for me. Toward the end of college was where I focused more on producing and writing and to be on that track. I did the Semester in L.A. program, so I timed it to be my last semester in college and used that as my transitional opportunity to live in Los Angeles.

CC: Are you planning on making Babe a film character in the future?

LMS: We actually optioned the film rights last summer to Summit [Entertainment] and we are currently waiting for the script to be written. We just optioned the rights and we don’t have anything to do with the movie version, but hopefully, if everything goes as planned, there will be a “White Girl Problems” movie in the future. I’m really excited.

CC: How is the work divided between you and your partners?

LMS: We’re all in [it] together equally. We all work on the book together. Much of the way we write is like a television writers’ room where we’ll get on the phone or Google Chat and we’ll break the story of what is going to happen in the book and we’ll go from chapter to chapter and decide what each chapter is going to be about. Then each week we would take a chapter and write it on our own, about 3,000–4,000 words, and then the week after that, we would go through the chapters in pairs and we’ll line edit the chapter. It’s really collaborative and it definitely is the three of us all in and we divvy the responsibility up on our blog and with Twitter, Facebook and Instagram.

CC: Do your family and friends know that you are one of the authors behind “White Girl Problems?”

LMS: My family and friends know all about it. My dad is obsessed with it. He’s always texting me a new white girl problem. I think he’s really impressed because it was a big question with what I was going to do with my life and I think there are a lot of elements with my life that he identifies with Babe.