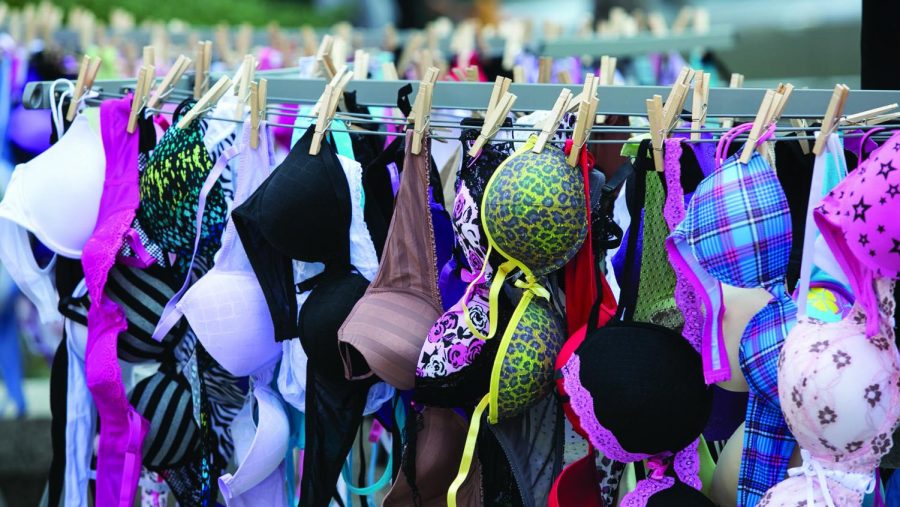 Tarneka Manning, manager of community outreach for the Metropolitan Chicago Breast Cancer Task Force, said she was happy to see that the art installation brought attention to how black and Hispanic women have been affected by breast cancer.

“I think the facts that they were splashing on the screens about the disparities among breast cancer mortality for black women and Hispanic women is something that a lot of people aren’t aware of,” Manning said. “Breast cancer awareness is something that people are definitely aware of, but they’re not aware of the issues that are underneath Breast Cancer Awareness Month.”

“Getting your screening mammograms starting at age 40 is still the best thing that we can do,” Kopkash said. “In the sense [that] if you do have a breast cancer, we can catch it in an earlier stage, and that gives you more treatment options [that are] available.”

Kopkash said even when women are feeling healthy, they should still stay on top of their regularly scheduled checkups.

“Sometimes these screening tests for women—a pap smear, a mammogram, a colonoscopy—oftentimes we don’t think of because we’re healthy and doing well [and] they get pushed to the back of our mind,” Kopkash said. “While things that cause symptoms—an ear infection, a broken bone—those are kind of in the forefront. As a person in charge of your own health, it’s really important to know the screening recommendations and bring it up with your primary physician if you have questions.”

Kopkash also said that about 1 percent of men are subject to breast cancer and should do their best to take preventative measures for their health as well.

players. When hit by a Bludger, players are out of the game until they touch their own goal post. The Seeker’s lone objective is to catch the Snitch—a ball attached to the waistband of a Snitch Runner. Once the Seeker catches the Snitch, his or her team ends the game and receives 30 points. The Keeper acts like a goalie, defending the hoops from Chasers and stopping them from scoring goals.

According to the U.S. Quidditch website, the sport is played at more than 300 universities and high schools throughout North America, Australia and Europe.

Alex Benepe, founder and CEO of U.S. Quidditch, said the game has found its place on college campuses across the globe with 170 official teams—most of whom are official college club sports— and more than 4,100 registered players.

Megan Ammer, president of the Muggles Association, said McCluskey’s passion will allow the Quidditch team to find success on the  playing field.

“Connor is only a sophomore,” Ammer said. “So [the Quidditch team] has two [more] years under his leadership. I’m sure he will [also] train someone else to take over [with] the passion and drive that he has for Quidditch.”

Ammer also said it is incredible to watch Quidditch come alive as a real-life sport.

“I have lived for this book series and these movies for so long,” Ammer said. “Connor is extremely dedicated to the team, and it’s incredible just to watch him get involved.”

Benepe said the game has seen rapid growth in the last several years, a trend he said he expects to continue across the globe.

“[Quidditch] is still growing very rapidly,” Benepe said. “Over the past four years, we’ve maintained a 40 percent growth rate annually [on] average. It’s very successful because of a few things—you have the ‘Harry Potter’ connection, which is obviously a valuable one, but I think what keeps people engaged in the game is how dynamic the sport is.”

Despite not being a fan of the “Harry Potter” series, Benepe said he fell in love with Quidditch and does not think people need to have an interest in the book series to enjoy playing the game. In fact, Benepe said he knows plenty of serious athletes who play the game but do not read the books.

“I wouldn’t even consider myself a diehard [‘Harry Potter’] fan,” Benepe said. “I mostly got into [Quidditch] because my friend suggested we try playing it. We try to tailor the sport to a wide variety of backgrounds. I happen to know personally a number of very serious athletes in the league who’ve never read the books and they love playing it. It’s also a co-ed full-contact sport, so there is literally no other sport like it in that regard alone. You can have men and women tackling each other. That is not something you can get anywhere else.”