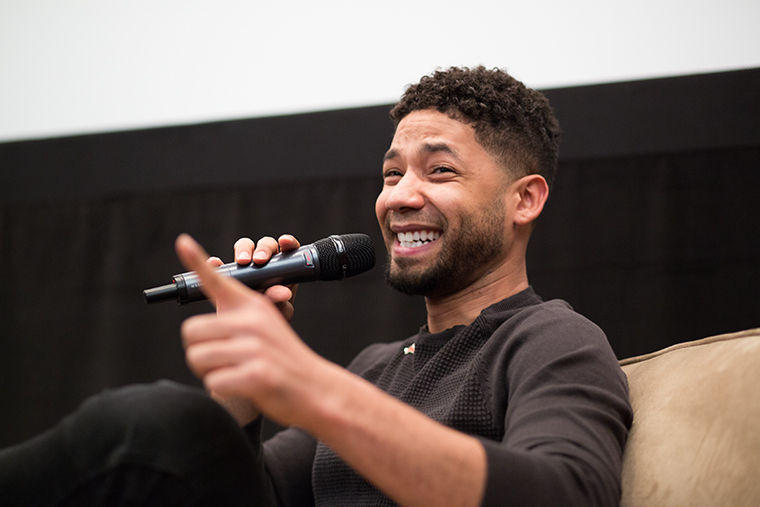 Jussie Smollett, best known for playing the character Jamal Lyon on the hit Fox drama “Empire,” spoke on the importance of diversity in Hollywood at an event celebrating African-American Heritage Month.

Jussie Smollett, star of the TV drama “Empire” spoke with Joshua Short, a junior journalism major, about his pride in his African-American heritage and the struggle for representation in Hollywood.

“I love being black so much, I can’t control it,” Smollett said. “The pride that I carry as a black man is so real and unwavering. It’s one of the few things I know for certain—they can shoot me dead, but they cannot take away who I am.”

In light of the recent controversies surrounding the lack of black representation among the nominations for this year’s Academy Awards, Smollett spoke about the importance of diversity Feb. 12 at “Navigating Hollywood: Do Black Actors Matter? The Many Faces of Jussie Smollett,” as part of the school’s African Heritage Month celebration.

Smollett, who plays Jamal Lyon on the show has become widely regarded as an inspirational depiction of a gay black man on television. His portrayal of Jamal even earned Smollett the Chairman’s Honor at the NAACP Image Awards earlier this year.

The conversation touched on a number of wide-ranging topics, including Smollett’s early roles, being inspired by David Bowie and Michael Jackson and praise for his sister Jurnee, who currently stars in the WGN series “Underground.”

However, Smollett took the opportunity to advise students about the importance of staying true to oneself.

“I am me,” Smollett said. “That is good enough. And anything else is great. If I can’t work in this business being who I am, then I don’t need to work in this business. I will go and create my own projects and do what I have to do. But the world is changing, and we don’t have to be as scared as we once were. We don’t [have] to hide who we are. If you feel like you do—I love you—but you don’t.”

Smollett also discussed the importance of speaking out and not hiding one’s beliefs or true identity to please others. Smollett, who identifies as gay, said it is important for the entertainment industry not to discriminate against somebody just because they are different and to give people a fair shot, regardless of their background.

“I am not disadvantaged,” Smollett said. “I am a gay black man. I play whatever role I want, and no one’s going to tell me—anymore than they told heterosexual Tom Hanks that he could not play a gay man—they are not going to tell me that is somehow going to be my disability. I don’t see that. That’s not my narrative and that’s not my storyline.”

While discussing the Academy Awards and the recent controversy surrounding the lack of diverse award nominees, Smollett stressed the importance of fair representation in the industry.

“If people of color are not represented in a fair way, we are not telling the truth of what the world looks like—that is wrong,” Smollett said. “That needs to be changed, tackled and addressed by everybody, because it’s affecting our world. We’ve got to stick up for each other. It sounds so corny, but that’s the truth. If we don’t, we will fail to exist. We need to coexist together somehow and realize if we don’t pull together and create together, we will have nothing.”

Cameron Hubert, a freshman television major, said it is important for actors of Smollett’s prestige to speak on issues of diversity in the film industry.

“I hope that at least one person in the audience is able to grasp and understand what he was saying,” Hubert said. “Be unapologetic about what you want to do with your life.”

Briana Fennell, a freshman music major, said she is happy people in Hollywood are speaking up about the lack of diverse roles in the industry.

“They just want this pathway for everyone to be equal, and I love that they’re striving for that diversity,” Fennell said. “Let’s just come together and be together.”

Smollett ended his conversation with a final thought about artists’ impact on society, telling the audience to follow their dreams and keep creating art.

“Artists are the gatekeepers of humanities,” Smollett said. “We tell stories of people that would ordinarily be voiceless. Those are the people that make a long-term effect on society.”