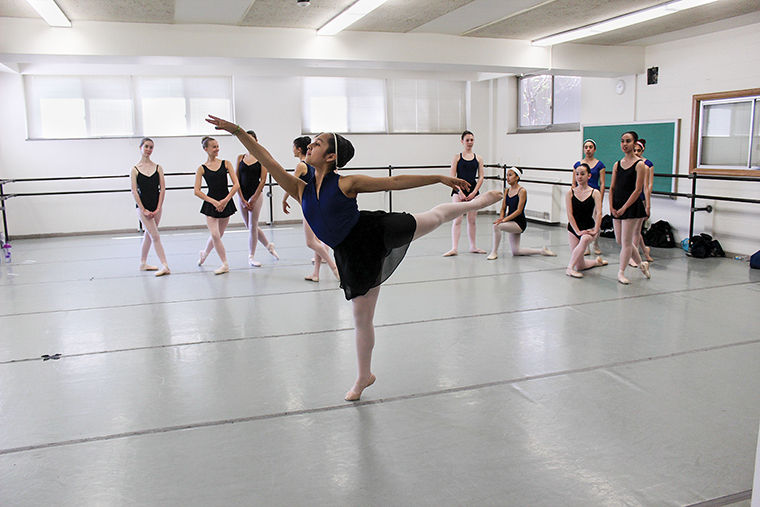 Chicago Ballet Arts, a small dance school located in West Ridge, will celebrate its 30th anniversary with a benefit concert on June 18 including both students and alumni who have gone on to be professional dancers.

Unlike classical ballet teachers who are noted for a stern demeanor as portrayed in movies like “Fame” and “Center Stage,” instruction at Chicago Ballet Arts in West Ridge defies those grim, unyielding stereotypes.

The North Side Chicago dance school’s mission is to let dancers do what they are there to do—dance.

The school, located in West Ridge in the basement of UNO Charter School—formerly St. Scholastica, 7416 N. Ridge Blvd.—has existed since 1986 but has been located in the far North Chicago neighborhood since 1995 after moving from Montay College on nearby Peterson Avenue.

Its 140 students will perform June 18 for the school’s 30th anniversary concert and benefit, where students from ages 5 and up will showcase what they have learned throughout the year, and alumni will perform at the school’s benefit, said co-director Patti Eylar.

Founded by dancer Clare Carmichael nearly 30 years ago, the school has been operated by Eylar and co-director Leslie Saunders, both dancers and instructors, since Carmichael retired nearly 11 years ago.

Saunders, to whom Carmichael bestowed the school after she retired, did not want to run the school alone, so she asked Eylar, whom she danced with in the ‘70s, to join forces. The two have co-directed for 10 years.

When Carmichael started the school in 1986, she wanted it to be different from competing dance studios. She wanted to appeal to young people who might not be as affluent as other dance students and include families who she said are oftentimes treated as “second class citizens” in the dance world.

“I wanted to have a school where people who did not have a lot of money could afford [to enroll], and [would be] open to the whole family. And that way the family could learn something too,” Carmichael said.

CBA’s mission, unlike most ballet schools in the Chicago area, is to allow open enrollment without a formal audition process.

Eylar, who danced for America’s first prima ballerina, Maria Tallchief, in the ‘70s for the Lyric Opera Ballet, experienced traditional teaching techniques firsthand by Tallchief and did not want to pass that form of teaching on to her future dance students.

“Maria Tallchief was very demanding, very strict and wasn’t against yelling at people,” Eylar said. “It’s very effective, but I just can’t carry it off. It’s not in my personality.”

Saunders, who went to the School of American Ballet, agreed that students can be treated with kindness rather than disapproval as an effective teaching method. They wanted to continue Carmichael’s mission for the school and its students.

“It was pretty well established under [Carmichael’s] mission that anyone can dance, and you don’t have to belittle them,” she said.

Eylar and Saunders do not audition dancers, but they instead encourage them to challenge themselves in class.

“If everybody else is doing a double pirouette, there’s nothing stopping you from doing three or four,” Eylar said. “And if they can, they do.”

Steve Schildwachter, president of the board of directors for CBA, became interested in the nonprofit institution when his daughter began attending.

After observing the school for his daughter and realizing the institution embodied a place of family, education and humble beginnings, Schildwachter joined the board and became president in 2009.

With three small studios, Chicago Ballet Arts is considered a small school, but Eylar and Saunders make the effort to include live pianists—a classic component of ballet.

Eylar said the school is committed to spending time, money and energy to use live music.

Schildwachter said it did not matter that the school was small in size.

“[We’ve learned] that small is beautiful,” Schildwachter said. “We haven’t set out to conquer the world of ballet by building a large building with our own studios and quadrupling our enrollment.”

Carmichael said CBA is in good hands because of the co-directors’ efforts to keep the school going.

“It’s a tough thing to do,” Carmichael said. “To have a highly positive experience for that many children. Leslie and Patti are doing an amazing, amazing job.”