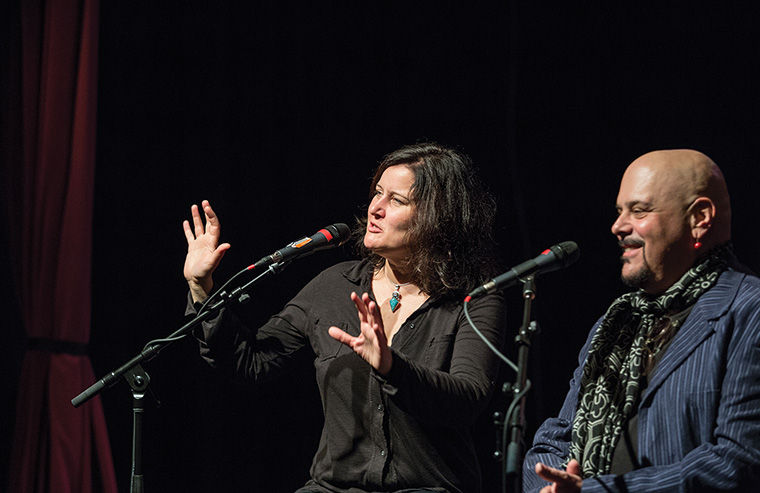 Grammy winner and seven-time nominee Paula Cole has joined the Music Department’s Artist-in-Residence program, which partners students with noted artists to receive workshop time, instruction and the opportunity to perform or record with them.

To kick off her residency, Cole participated in a Q-and-A open to students and faculty Oct. 27 at the Music Center, 1014 S. Michigan Ave. At the event, the New England native spoke about her experiences in the music industry and decisions that helped define her journey and performed her song “Happy Home,” a song she said led to a better relationship with her mother.

“When artists get personal—personal equals universal I think—When we do go there, it touches everybody,” Cole said. “That’s my intent anyway.”

Cole urged the student artists in attendance to write their own music and build an image through a website or social media. She said the Internet and websites such as YouTube serve as the modern-day business card, adding that songwriting is her way to most accurately represent herself.

“It’s owning your intellectual content [and] being the captain of your ship,” Cole said. “It all starts with the song. As a singer, you’re at the mercy of work that comes and goes, but I have these feelings and truths inside of me that must come out.”

Cole said she has made career decisions that have shaped her experiences. At the end of her senior year at the Berklee College of Music, she turned down a record deal and took seven years off from music to raise her daughter.

She said she hopes her focus on writing honest and open music will be what ultimately helps shape her legacy.

“I care less about fame and popularity than I do [about] leaving a great body of work that stands the test of time and speaks for itself,” Cole said.

Kathie Mills, a senior music major, said because she is an older student, she is more familiar with Cole’s work and excited to be working closely with someone of Cole’s caliber throughout the week.

“I think it’s invaluable to have a woman of her caliber come in and talk about how she stayed true to herself,” Mills said. “Bringing her family and career in full circle was empowering and supportive.”

Mills said she related to Cole more than the average Columbia student because she has been working as a vocalist in Chicago for more than 15 years. Because of this, having the chance to meet and connect with Cole struck a deeper chord with her, she said, than it may have with the other students.

“Coming back to school at an older age, it got a little confusing being with predominantly younger students, but I found my balance,” Mills said. “You’re older. You know what you want to do. You came back to do this and it’s like ‘keep your focus.’ That’s pretty much what she said today, and it was exactly what I needed to hear.”

Being a part of a few Columbia-based music ensembles, Mills said she had the opportunity to have songwriting and recording sessions with Cole, as well as Cole’s closing performance at the end of the week.

Ezra Morris,  a senior music major, said he related to Cole’s sensibilities as a songwriter and hopes to emulate the path she has taken in her career as the driving force behind her music and her career.

“[Cole’s words] spoke to how important it is to stay true to yourself and really listen to what’s inside as opposed to external forces,” Morris said.

Morris is also a part of two of the ensembles that got to work with Cole during her week in residence. He said the experience is something that reassured him that Columbia is the right place for him and the opportunities offered to students here are unparalleled.

“This is one of the things that makes me most grateful about coming to Columbia,” Morris said. “If I wasn’t here, I wouldn’t have this experience. I can walk away and say I was in the same room with a Grammy-nominated performer who spoke to me and gave me this advice that I’ll remember forever.”