Worry not Chicago sports doomsday preppers, better years are on the way 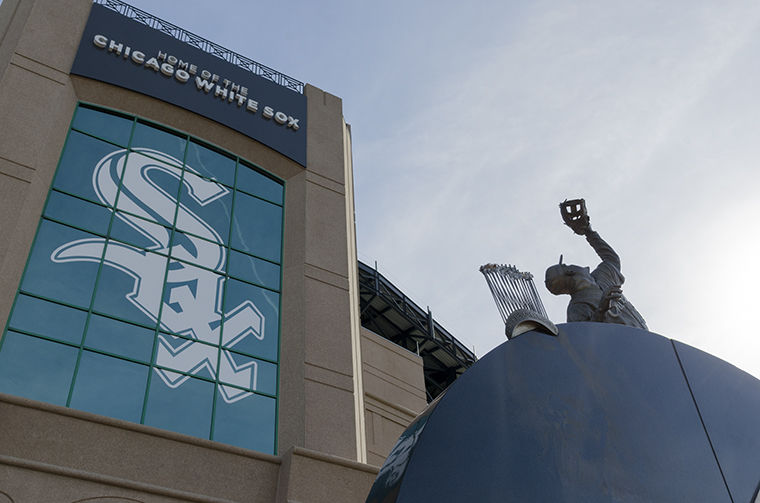 Worry not Chicago sports doomsday preppers, better years are on the way

After failing to capture the 2017 National League Champion Series, the Cubs shattered their fans’ dreams of Chicago being home to a back-to-back world champion team—an all-too-familiar tale of disappointment.

The defending champions could only muster one win against the Los Angeles Dodgers in an overall disappointing postseason run that ended in an 11-1 loss, which has left Chicago sport fans scratching their heads as to what went wrong.

“It can never be the start of a slump [for the Cubs] because you have an activist front office,” said George Castle, longtime Chicago sports journalist and author. “It is simply the laws of average in baseball, and it proves the difficulty of winning the World Series.”

Chicago sports fans have never enjoyed a year when all of its professional teams have played winning seasons, according to teams’ record data. The city’s teams tend to slump and rise in trends, as seen reflected in its two MLB teams, one NBA team, one NFL team and one NHL team—which has won three Stanley Cups since 2009.

To avoid a 2017 season repeat, the Cubs have to make some crucial offseason roster changes, Castle said. There is a hole in their starting pitching lineup that needs to be filled by two or more pitchers, most likely from outside organizations because the Cubs’ pitching options in their minor league system are lacking, he added.

This move potentially calls for trading one of the team’s young stars—rumored to be Javier Baez, Ian Happ or Kyle Schwarber—to make the deal, but Castle assured that the team is in reliable hands.

“The organization, baseball-wise, is in the best shape it’s been [in] probably since the 1930s because of the front office, [and] their success in drafting hitters and their ability to put together a contending team,” Castle said.

While the Cubs are contenders now, the White Sox are looking to contend within the next few years, Castle added. Since winning the World Series in 2005, the team has played eight losing seasons—five consecutive—including a 72-90 season just two years after being world champions.

The 2005 season’s success was an unpredictable one-shot set of “happy circumstances,” so the team was not built to repeat in the following years, said Rich Lindberg, a White Sox historian and author.

“The Sox didn’t have a great [minor league] system and [are] only now rebuilding to the point where their system is expected to be very productive,” Lindberg said. “We’re hoping that within the next two seasons, the team will again return to contention and perhaps go to the World Series.”

Lindberg explained that White Sox General Manager Rick Hahn has done a remarkable job turning the team around since he took the position starting in the 2013 season. Trading away costly veterans and the team’s lead pitcher Chris Sale has produced a young rookie group close to emerging as major league stars, he added.

“After 12 years of relative futility with a few winning seasons, [the Sox have] turned the page and began copying the success blueprints of other teams … who acknowledge that to get to where we want to be, we’re going to have to strip down the machine—literally take it apart and rebuild it,” he said.

Since 2007, the Bears have only had two seasons with at least 10 wins and are now looking to its young stars to lead.  Rookie quarterback Mitchell Trubisky, who gives the team and fans hope, has changed the landscape of the team, said Adam Jahns, lead Bears writer for the Chicago Sun-Times and adjunct professor in the Communication Department. The team has a solid plan in place built on their 2017 first-round, second overall, draft pick, and the team has gone 2-1 since he’s been the starter, Jahns added.

“You have a lot of young players on both sides of the ball producing, becoming more vocal [and] noticeable, a lot of different valuable [qualities] for the Bears every single week,” Jahns said. “They need their young faces to become faces of the franchise.”

The team that will face the most hardships this year and may not be a playoff contender for some time is the Bulls, which Castle calls the most “poverty-stricken” team in Chicago’s sports landscape.

In June this past offseason, the team traded away its all-star small forward and shooting guard Jimmy Butler to the Minnesota Timberwolves, which was a “glaring” sign for longtime Bulls fan Brian Welk, reporter for The Wrap, native Chicagoan and current Los Angeles resident. The team is tanking, and the trade from the “incompetent” front office was a sign the team does not care about this season, he added.

“It always felt like we could be a playoff contender, but that completely changed this year,” Welk said. “We went from this borderline-playoff team to literally the worst team in the NBA, so I have totally checked out.”

To bounce back for future seasons, Castle said the team needs to be more strategic in its draft picks as the Bulls’ recent picks have been subpar and have not been impactful players.

“[The team]  got a lot of good value out of [Butler], but they’re going to have to get several Jimmy Butler’s, plus someone of even higher quality in the next couple of drafts,” Castle said. “The Bulls [will] have to have a superstar in there somewhere.”