Students sit in, Kim slips out 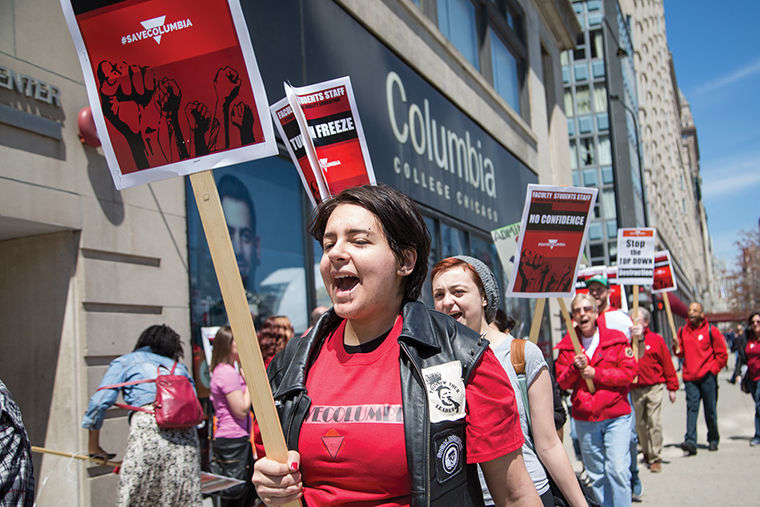 Members of the SaveColumbia coalition protest the finalization of the Strategic Plan outside the 600 S. Michigan Ave. Building on May 1. The group demanded a meeting with the college’s administration.

Officers from the Chicago Police Department lined the lobby of the 600 S. Michigan Ave. Building as the six remaining participants of the SaveColumbia coalition’s May 1 protest outside the president’s office voluntarily exited the building of their own volition at 11 p.m. to avoid potential criminal trespassing charges.

Following an informational picket line outside of the building beginning at 11:30 a.m., the coalition—composed of students, staff and faculty—staged a sit-in in the fifth floor hallway of the 600 S. Michigan Ave. Building where the Office of the President is located. The coalition, which was protesting the impending May 12 finalization of the Strategic Plan, tuition hikes, increased class sizes, program reductions and the elimination of faculty and staff positions, threatened to remain until their demands were met or until they were escorted out.

The protesters gave voice to a series of chants, including: “Students need to realize, Dr. Kim is full of lies,” “Top-down, fed up” and “Administration is unfair/ Dr. Kim is in there/ standing with the provost/ killing what we love most.”

At approximately 10:30 p.m, CPD officers arrived in case the students refused to leave.

President and CEO Kwang-Wu Kim was in his office for most of the sit-in and said he does not believe making demands is an effective way to get things done, adding that he has been available and responsive to the coalition’s concerns.

“Most people at this school know I try to meet with people when they request meetings,” he said. “This was not a requested meeting today. I was never directly informed about any of this. I’m not sure this is really an appropriate forum.”

The coalition’s demands were outlined in a Change.org petition by students claiming “no confidence,” which calls for the immediate removal of Kim and Senior Vice President and Provost Stan Wearden from their offices.

The demands include a tuition freeze; increased budget transparency; a halt to all hirings of new vice presidents; smaller class sizes; a reversal of all administrative decisions made without input from the college community,;the creation of a shared governance structure composed of staff, students and full- and part-time faculty; for the administration to bargain in good faith with the United Staff of Columbia College—Columbia’s staff union—to finalize its contract; and for the administration to follow its collective bargaining agreement with P-Fac, Columbia’s part-time faculty union.

P-Fac’s core leadership also unanimously decided to move forward with a vote of no confidence in the administration, according to Diana Vallera, an adjunct professor in the Photography Department and P-Fac president.

“That’s their right to do and that’s not something that I have any control over,” Kim said. “Eventually, if they are serious, it’s something that the board of trustees looks at.”

“From what we’ve seen, there’s plenty of room in the hallway,” said Sarah Vesely, a junior creative writing major who occupied the stairwell. “We were told there were about 30 people up there, but from pictures it only looks to be about 10.”

Frustrated students began sending tweets under the #SaveColumbia tag, alleging that the administration was “trapping students in the stairwell” and that the building’s air conditioning and water supply had been shut off.

Cara Birch, public relations manager, said these rumors were inaccurate and that the air conditioning had not yet been turned on in any of the buildings on campus due to cool temperatures outside.

Nearly five hours after the sit-in began, Mark Kelly, vice president of Student Success, addressed the protesters, stating that he understands the coalition has concerns and that the college respects the right to protest. However, he said neither Kim nor Wearden would meet with them as a result of the sit-in.

In visible disagreement with Kelly’s statement, Vallera told Kelly his words only made the situation worse.

“You’re making it really bad right now,” she said. “The demands were really clear. We asked for the demands to be met by today. There’s no response. So no, we didn’t set up a meeting. We asked for a response by today. No response is unacceptable. It was silent.”

Within his remarks, Kelly said the coalition had the opportunity to express its concerns through SGA forums as well as at Faculty Senate and P-Fac’s bi-weekly meetings with the provost.

“This coalition speaks for itself—we don’t have to go through any other governance except this coalition, and I think we made that really clear,” Vallera said. “We’ve done everything, and to have you come out here and say this isn’t the right way to do it is unacceptable.”

Following seven hours of protest during the sit-in with no contact from Kim, the president quietly exited the fifth floor, walking almost unnoticed past the unprepared SaveColumbia coalition to the elevators.

At the informational picket, Gita Kapila, an adjunct professor in the Cinema Art + Science Department, said she wanted to see a reversal of the unilateral decisions from the administration, which “undermines [faculty] work in the classroom.”

The final draft of the Strategic Plan moved forward because, according to Kim, faculty and student complaints did not coincide with the content in the plan, as reported April 27 by The Chronicle, Kapila said she does not believe this is accurate.

Casey Walker, a junior creative writing major, said Kim has attempted to speak with students about their concerns, but a disconnect remains.

“I spoke to him at Pizza with the President and it felt like we were having two different conversations,” she said. “He says he’ll look into things but he never wrote my name down.”

Walker said SaveColumbia not only wants to speak with Kim, but also wants promises that its demands will be met.

After coalition members heard they would not be addressed by Kim or Wearden, they discussed the next steps in the plan to make their voices heard. In addition to discussing future sit-ins throughout the week of May 4, Vallera said she has filed an unfair labor practice with the National Labor Relations Board that calls for an injunction against all unilateral decisions from the administration.

Vallera said she and other faculty members understand the potential repercussions of their actions but that they are willing to take the risk.

“Do you know what I’ve been through?” she said. “Of course I have a family and this is my income, but I think this is too great of a cause. I’ve believed in this for over five years and I’m not going to stop now. I’m always worried, but we’ll take the steps necessary if anybody tries to retaliate.”