Vandalism or Art? The city continues to accelerate its response to graffiti complaints 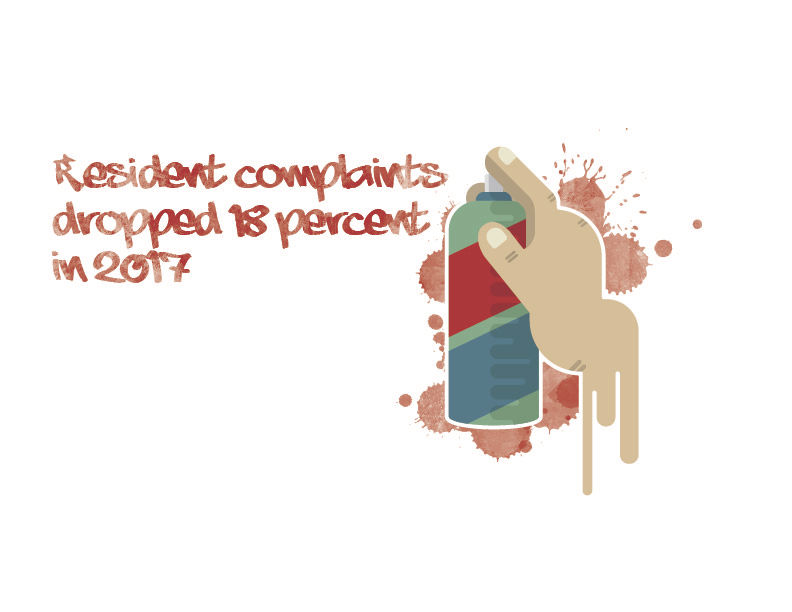 Vandalism or Art? The city continues to accelerate its response to graffiti complaints

Chicago has seen an 18 percent reduction in resident graffiti complaints over the last year, according to Department of Streets and Sanitation Director of Public Affairs Sara McGann. DSS attributes this to a new grid model of truck routes and new blaster trucks, which allow crews to sweep five wards a day, according to an Aug. 18 mayoral press release.

“The prompt removal helps mitigate the problem and deter vandalism, so if vandals don’t have their work displayed for long periods of time, it sort of seems like it’s not worth their time,” McGann said.

DSS reported it has completed more than 57,000 graffiti removal calls in 2017 and now can act upon requests within five business days, cutting response time in half from previous years. The wards that receive the most resident complaints are the 12th, 47th, 33rd, 14th and 25th, according to McGann. If residents report graffiti, they most likely found it to be obscene or unacceptable, she noted.

“If it’s public property, it can be taken down,” McGann said. “Most times, [it] will be taken down. Even if it were a beautiful message or piece, it’s vandalism.”

Local artist Don’t Fret said about 97 percent of his citywide artwork has been taken down by the city.

Don’t Fret has been marking Chicago with his artwork for more than 10 years. He explained he has put up pieces at 2 a.m. that were later removed at 9 a.m; meanwhile, other work he’s done remained undisturbed for up to two years. However, he said it is not frustrating for the work to be taken down and called it “par for the course.”

“It’s interesting to me that some people find my work antagonizing just because its placement is illegal, even when it’s just a character walking down the street or something,” he said. “You can debate all day public vs. private space and all the nuances, but to me, the bottom line is the street is supposed to be a place to share ideas.”

Chicago has had a strained relationship with graffiti over the years. City Council passed an ordinance in 1992 banning spray paint sales in the city, which is still in effect.

“I would take the train to work in the morning and I would see graffiti on windows or along the rooftops or on buildings, especially closer to the Loop,” said Daniel Makagon, a communications professor at DePaul University and graffiti expert. “That graffiti would usually be gone by the time I was on my way home if I was [there] all day long.”

In other major cities like Los Angeles, graffiti has historically been tied to gangs, Makagon said. However, graffiti is treated differently in various cities and countries, he added.

“It seems like in the U.S., there’s an effort to clean up graffiti whether it’s associated with gang violence [or if] it’s just seen as a nuisance crime,” he said.

Makagon said it is understandable the city would be quick to wipe away an aesthetically uninteresting tag—a stylized signature depicting the artist’s name—despite the political significance of an artist announcing their existence, which is usually ignored. However, he added that the art’s location can determine how long it stays.

“Some of the neighborhoods where there [are] more forms of public street art—like Wicker Park and Pilsen—are neighborhoods that in general are probably open to various modes of public communication,” Makagon said. “If something appears and they think it looks interesting, maybe they’re okay with leaving it; whereas in another neighborhood, they wouldn’t.”

Outside of the city’s downtown area, public art is few and far between and graffiti can help fill in those gaps, Makagon said.

“[It] is a way to provide an alternative aesthetic form in the city that adds to a city’s vibrancy and excitement,” he said. “Even if there’s disagreement [about the art], it’s good to have it versus to not have it.”