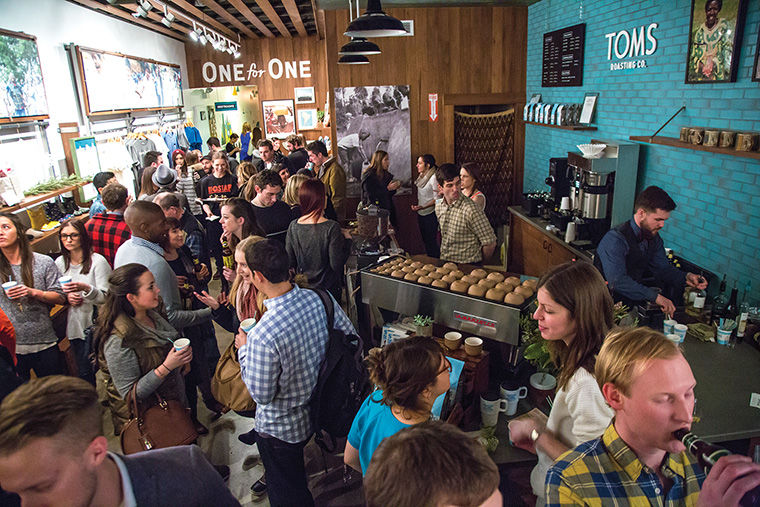 More than 100 people attended the opening of the new TOMS retail location on Dec. 3 in Wicker Park, 1611 N. Damen Ave.

Blake Mycoskie founded TOMS in 2006, creating a shoe line that was based off of the company’s now famous “one-for-one” model. For every pair of shoes TOMS sells, a pair is given to an impoverished child. Nearly nine years later, the company has stayed true to its original model and has expanded the brand to include eyewear and coffee. The company now gives shoes, eyewear and water to people in more than 60 countries around the world.

TOMS Chicago is the company’s fourth retail location in the U.S. It is also the third location for the company’s coffee brand, TOMS Roasting Co. Coffee. It made sense to open the company’s next store in Chicago, Mycoskie said in an email.

“Chicago was at the top of my list and it always has been,” he said. “Chicago is such a vibrant and alive city and people in Chicago love coffee.”

Mycoskie said the team behind TOMS Chicago went through a long process to determine the perfect location for its new store.

“We [wanted to] really reach TOMS fans and share our story, our vibe and our space with people new to the brand,” Mycoskie said.

Krista Andraska, manager of TOMS Chicago, said the new store will benefit the neighborhood by providing a special space for the community to come together.

“It’s not only a retail space for a store,” Andraska said. “It’s also a space for people to come in and learn about the TOMS movement and how we’re giving back. It’s also a great place to hang out and really feel like you’re a part of the community.”

With a coffee bar in the back of the store, offering another coffee option for commuters will be convenient for the surrounding community, according to Kari Gibbons, visual merchandising manager for TOMS Chicago.

“Once the [Damen] Blue Line stop opens up again, people are going to be excited to have somewhere else to go for coffee,” Gibbons said. “If you buy a cup, we give a day of water to someone in need, so it’s a little different from what everyone else has going on.”

Gibbons said the company already reaches many demographics, but she hopes the new store will educate customers about the company.

“[TOMS Chicago] is going to be able to give people more knowledge about all of the product lines,” Gibbons said. “A lot of people don’t know that we roast coffee, so I think it’s going to open the current audience to [all sides of the company].”

Adriane Battilana, assistant manager for TOMS Chicago, said the idea behind the movement will help bring a new audience of consumers into the store.

“We started with shoes, then eyewear and now coffee, so there’s something for everybody,” Battilana said. “We’re leading the charge in how we give and grow our company. Giving back is something that all companies should aspire to.”

“The big picture is that this goes back to our Giving program where we provide shoes, sight and water to people in need,” Mycoskie said. “But it also includes improvements, like providing people with a place to hang out, have a nice cup of coffee, and see what TOMS is about.”