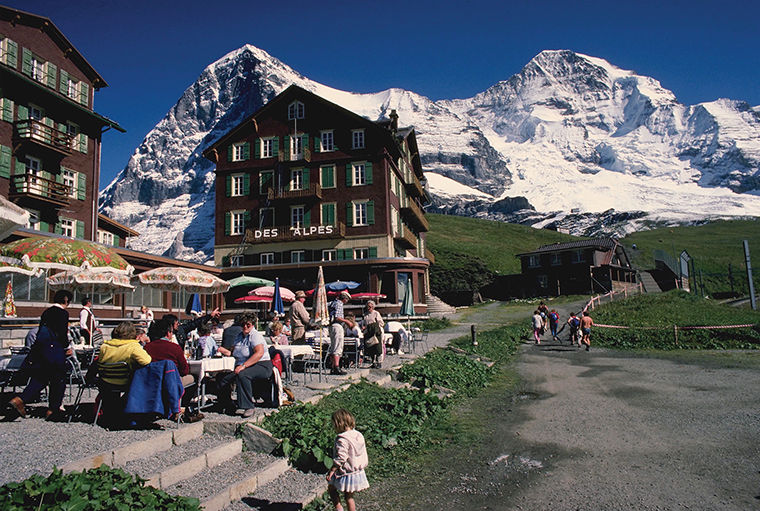 Cafe and Peaks at Grindelwald

The U.S. is known as a leader in many areas, but as International Happiness Day approaches on May 20, Gallup Global Analytics has revealed that the U.S. did not make the list of the world’s top 10 happiest countries.

Merriam-Webster defines happiness as a state of well-being or contentment in which an individual feels pleasure or satisfaction.

According to the results of Gallup research, which not only evaluated at the happiness of populations globally but also on college campuses, cultivating positivity may be dependent on less obvious factors than researchers thought.

Gallup analyzes data and conducts yearly surveys to determine which country is the happiest.

This year’s report relied on variables to determine each rank on the list, and this information becomes part of the report for the next year.

Clifton said the researchers aggregate the answers to five questions regarding happiness and well-being and average the positive answers to identify countries that make the list.

The research also aimed to determine happiness scales on college campuses in the U.S. as opposed to just on a global level, said Brandon Busteed, executive director of Education and Work Force Development for Gallup.

“We look at college graduates’ overall well-being by looking at their purpose, well-being, social well-being, physical, financial and community well-being,” Busteed said. “It is a lot about the support that they have in their lives and their feelings of engagement with the work they are doing.”

Busteed said much of the analysis included comparisons between the types of institutions students attended and their locations.

He also said that the analysis yielded some interesting data.

“We looked at graduates by type of colleges and universities and did not see a difference in the likelihood that the graduates were more engaged or thriving in their well-being by type of institution [public or private],” Busteed said. “There were no statistically significant differences, so we learned that it was the kind of things happening in colleges that makes the differences. ”

According to Melanie Rudd, an assistant professor of marketing at the University of Houston’s Bauer College of Business, the way people define happiness is not uniform.

“Our definition of happiness kind of changes over time,” Rudd said. “If you ask younger people what is happiness, they tend to define it more as excitement and an adrenaline type of happiness. If you ask people who are older, they say it is peaceful, calm and relaxed.”

The traditional saying, “Money cannot buy happiness,” is false to a degree, according to Clifton.

“People who live in wealthier countries tend to rate their lives more highly,” Clifton said. “People in poorer countries rate their lives less so, but when you ask people about whether or not they’ve smiled or laughed a lot, it’s much less dependent on money, which is why a country like Guatemala can rank so highly on that index.”

Clifton said in order for the U.S. to bolster its ranking on the happiness charts, individuals should focus on purpose in life, community, finances, physical health and social life.

Busteed said the Gallup reports revealed that the ways in which U.S. citizens pursue happiness are somewhat misguided in terms of global and college life.

“We are operating under a very narrow definition of success. In education we measure that by grades, test scores and graduation rates,” Busteed said. “And that’s not wrong, in and of itself, but that is an extremely limited way of looking at how we’re doing. For example, in all the key things we learned from our study of college graduates, there were six really special experiences that you either had or didn’t have as a student. And interestingly enough, none of the six really have anything to do with what we think of as the classic and pure academic experience.”

Rudd said happiness is very much achievable, but people need to use various strategies to achieve and maintain it.

“One of the best ways to make yourself happy is to actually help other people,” Rudd said.