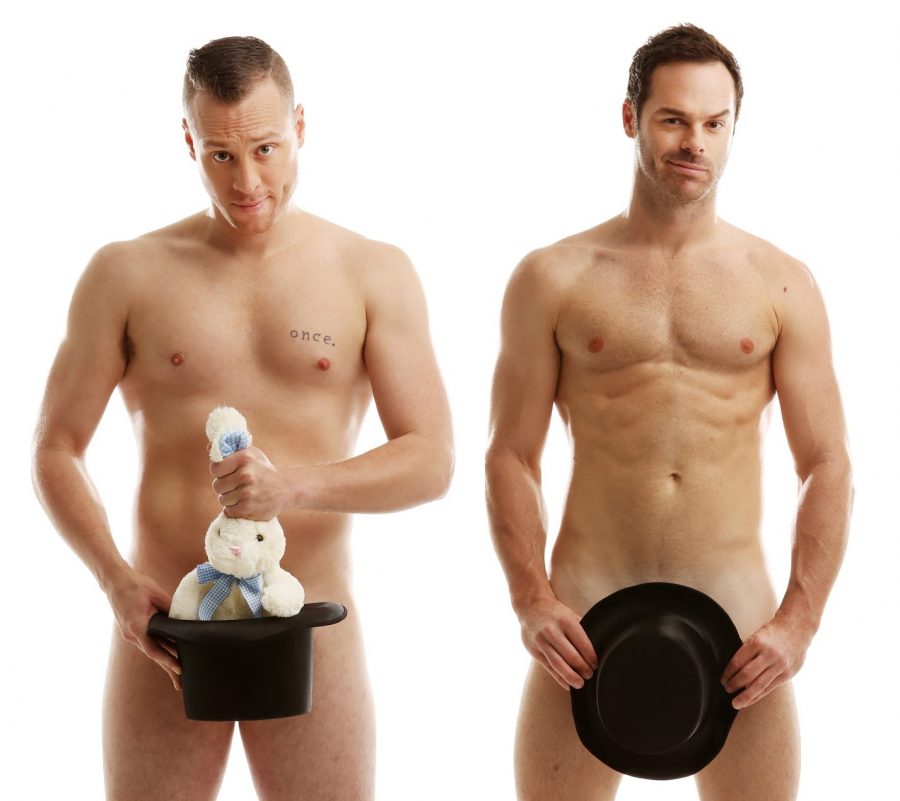 Christopher Wayne and Mike Tyler, co-stars of "Naked Magicians" are changing the way magic is done and exposing the naughty side of everyone through magic.

Christopher Wayne was eating fish tacos at a restaurant in Worcester, Massachusetts when a group of older women stopped to give him and Mike Tyler a slice of their birthday cake. The duo from Brisbane, Australia, laughed and thanked them.

“I think one of them likes me,” Wayne said through mouthfuls of cake. “It’s the Aussie accent, mate.”

This is not an unusual occurrence by their standards. But the Aussies are more used to getting bare than getting hit on for their accents—although that happens too, Wayne adds. Four years ago, Wayne and Tyler changed the world of magic with a naked twist that has since spread all over the U.S., Australia, the U.K. and New Zealand. The show is touring the U.S. through April 6.

Wayne and Tyler star in their show “Naked Magicians” playing at the Broadway Playhouse, 175 E. Chestnut Ave., March 14–19. The Chronicle caught up with Wayne to learn more about the show before it opens in Chicago.

THE CHRONICLE: How did you come up with the show?

CHRISTOPHER WAYNE: We were both professional magicians, and we had this idea that we knew was either going to be the best or worst idea ever. We are so glad we did because it has changed our lives. We both loved magic but hated every stereotype about magic. We thought, “How do we strip away those stereotypes?” Literally strip away the stereotype—get rid of the top hat, cape, [and] bunny.

How has the show changed your lives?

We never would have anticipated the success the show has received. Because magic had never gone to a naughty place before, people were responding to it in the most amazing way and the show never stopped. We have been [touring] for three years now, and aside from the fact that the audience has grown bigger every night, some of the craziest things that have happened [have been] spending six months touring America. We have seen more of America now than most Americans, which is crazy.

Last year, we had the honor and privilege of doing a season on London’s West End, which not just for a magic show but for any theatrical show, is an amazing achievement. We are humbled and proud of it, and it will be one of those things that we tell our grandkids about—minus the naked parts.

Who is your typical audience?

If you stand on stage, in between Mike and I naked, you are going to see 80 percent women of all ages and 15 percent gay guys. The couples in the last five percent [are] men dragged out by their girlfriends and wives and others [who] thought it would be a really fun date night. It doesn’t matter who you are, what your background is; everyone at some point loves magic, and everyone has that naughty, cheeky side.

Are you naked for the whole show?

No, we like to make you work for it—kind of like on a date. We come out onstage completely suited up and we lose our clothes bit by bit, but the audience has to earn it, which has actually worked in our favor. We saw some other review shows where the guy is naked from the get-go or they take off their clothes in the first five minutes, and there’s no reward in that. We promise you we will get naked but you have to see our little foreplay first.

How are you so comfortable being naked on stage?

At first, it was the scariest thing in the world because we were both magicians, not strippers. We literally took on what was the biggest fear for both of us. It was our first show and there were about 200 people, but they were people we knew. When our pants came down, the audience erupted and everyone was happy. Now, I almost feel invincible after that. If you can stand naked in front of a room full of people, what’s left? Bungee jumping? Like, bloody hell. Now for both of us, if we are onstage in front of 200, or 2,000 people, there is no better part than when we are standing there [wearing] nothing but a smile on our faces

What do you do before the show to get pumped up?

That hour before the show, [I’m in] my dressing room, I got some music on and I am suiting up because the only thing better than a naked man is a man in a well-tailored suit. Although we do give you the naked part, I like the ritual of suiting up and creating something nice to walk out on stage [in].

Have your parents come to the show?

All of our parents have come and they actually really love it because the show—at its core—is just a really funny, naughty magic show. It is weird when women are sexualizing us and our moms are watching and the women are talking about who they want to bang, but aside from that, our parents are really proud. We are one of the biggest magic showsto ever come out of our country. All Mike and I have ever wanted to do since we were kids is do magic tricks and make people laugh, and that is [how] our parents raised us. Now we get to do it on a scale that none of us would have imagined.

How did you adapt your magic tricks to the show?

We had to reinvent our magic. We were both professional magicians and magicians use their sleeves and pockets. We had to start from scratch. Thankfully we had the best misdirection in the world: our naked bodies.

It was the challenge of taking magic and changing it to things that were naughty and sexy. It was the hardest and easiest thing ever because no one had ever done it, so we were literally looking at a blank sheet of paper, like, “What are we going to draw?”

Has anything gone wrong or been embarrassing onstage?

Not during a show, but during a photo shoot with the biggest newspaper in Australia. It was when we made the front of the entertainment section there.

[Tyler] had to throw flash paper [a highly flammable compound used by magicians formed by exposing cellulose to nitric acid] into the air but because of the humidity in the room—normally it burns straight away—it burned at half the rate and the flash paper landed on the tip of my penis. My d–kgot burned and we had to stop for a minute. We do it one more time—and I could not have made this up—the exact same thing happened again and literally my job and my hobby almost went up in flames in an instant. That’s a true story. If you are wondering, everything is fine now, wink, wink.